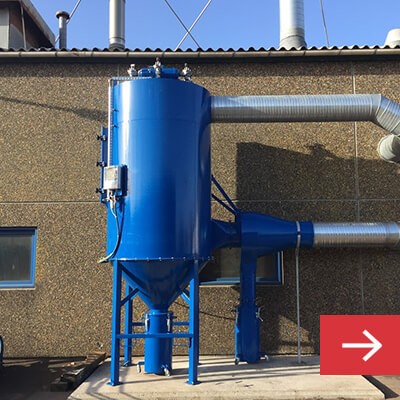 Industrial cyclone separation is a process which eliminates minute separate particles from air and gas without using filters. Instead, they use the cyclone separation process to remove such particulates. Moreover, the mixtures of solids are separated by using rotational effects and gravity.

The Industrial cyclone dust collector also called as cyclone dust separator is such equipment that is used in industries when they want to reduce the amount of dust arriving at the filter. This is done by slightly dampening pollution in the aspirated air. Thereby, it serves as a precautionary treatment to reduce dust getting into the filter. This dust collector suits many different applications in industries like chemical, food, and Pharmaceutical. It works as biomass, process filtration, metal and wood processing and such other applications.

The Industrial cyclone dust collector works in a unique way by creating a high speed revolving air flow. This air flow is created in a container in the cylinder or cone shape, which is called as a cyclone. The air moves in a curved pattern starting at the topmost part of the cyclone and ending at the bottom end.

From here it exits the cyclone through its centre. In the process, the large particles of dust fall to the bottom of the cyclone and can easily be removed. The Effectiveness of the cyclone increases with lower gas density and with a smaller outlet diameter among other things.

There are several benefits of using a cyclone dust separator. Some such benefits are marked below: